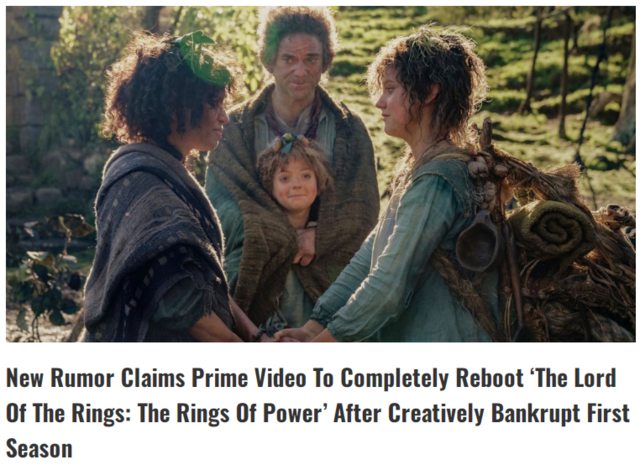 >This new rumor comes from YouTuber Gary Buechler of Nerdrotic who says, “We have heard the rumors from my man, Chris Gore, that the showrunners might end up being fall guys and we might have to wait ’til after award season to see if that actually happens.”

>He then adds, “I also heard that they’re going to go for a full on reboot with this series and try to pretend that the last two months didn’t happen. Roll out the publicity, maybe roll out some more influencers and try to get people to binge The Rings of Power. Good luck.”

>Buechler went on to state, “And to add to that, what if I told you that The Rings of Power did not start this way. It was never meant to be a woke intersectional disaster. It didn’t have not-Gandalf. It didn’t have repurposed Hobbits. It didn’t have Halbrand as Sauron, and it didn’t have warrior Galadriel.”

>“What if I told this show was usurped by people like Lindsey Weber and Jennifer Salke. And what if I told you that the fan attacks came from the top. More on that in my next Rings of Power video,” he teased.