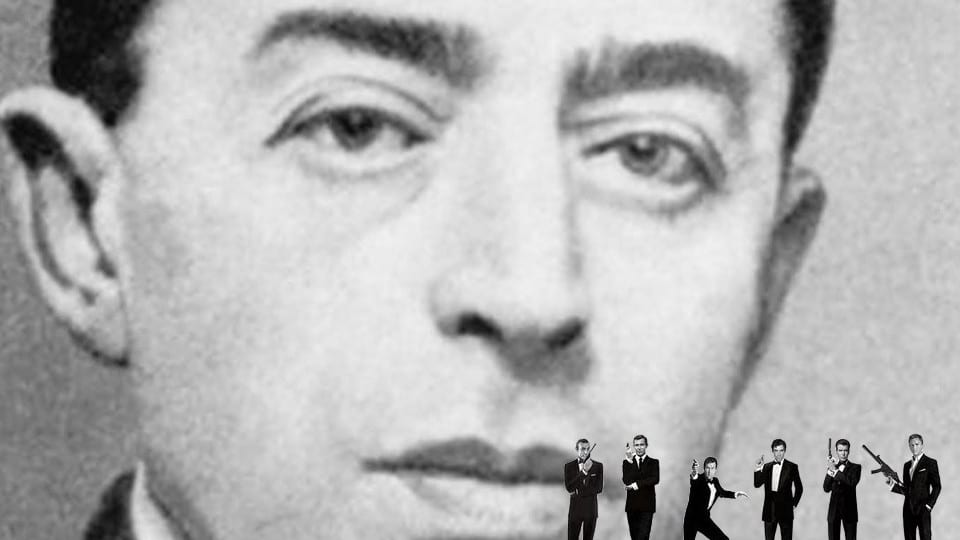 With new Bond movies being announced on a regular basis, it seems Ian Fleming's greatest creation has the legs to last in perpetuity. And as Lashana Lynch prepares to become the first Black female 007 -- and seeing as there's a great deal of debate online about which race or sexuality to make James Bond next -- we decided to delve into spy history and find out who Fleming, who was a former member of Naval Intelligence himself, based his master spy on.

Was it his brother Peter Fleming who was an intelligence expert? Was it Fleming himself?

No, the most likely candidate was a gnomish man who was eventually nicknamed the Ace of Spies. One Lieutenant Sidney George Reilly MC.

Reilly, born Zigmund Markovich Rozenblum on 24 March 1874 in Odessa, Ukraine according to a Soviet secret police dossier, or in 1873 according to other sources, became a British spy in 1909.

He enjoyed a number of successes in his espionage career which meant he was frequently the topic of conversation around the Secret Intelligence Service tea urn. He won a Military Cross and was rumored to have been trained to try and assassinate Lenin.

There have been claims that his storied life was mostly made up, but he did share a mutual friend with Fleming, a man called Bruce Lockhart. Lockhart told Fleming about Reilly, who apparently had many mistresses, liked the finer side of life, and spoke various languages. Thus James Bond was born.

How different Bond could have been if Lockhart had been a close personal friend of Kanye West instead? Miss Moneypenny could comment on how fetching a 5ft 2in Bond looked with his new gold-plated MAGA hat and giggle as Bond called her "his favorite ho."

MI6 is an almost archaic term for the properly titled SIS (Secret Intelligence Service), whereas MI5 is actually the Security Service (wisely not shortened to the SS). They have their origins from the First World War, when a number of departments made up the Directorate of Military Intelligence.

MI1 dealt with code breaking whilst MI2, MI3 and MI4 dealt with various geographic regions. There were departments numbered up to MI19, which was for interrogating prisoners of war. MI13 and MI18 did not exist. Many of the departments eventually became defunct, were disbanded or had their duties taken over by the remaining two MI departments.

However, there is some popular belief that the shady MI7 still exists, dealing with things like UFOs; a sort of British version of Men in Black. MI7 was originally used to deal with propaganda, so they would be the right bunch to cover up their tracks. Further potential evidence is provided in the Johnny English films with Rowan Atkinson playing an MI7 agent. So MI7 must exist as everyone knows films don't lie: 18th century pirate captains wore eyeliner, the Americans single-handedly won the Second World War, and Megan Fox would date a guy whose best friend is a robot.

Which actor was the best James Bond?

There are questions that can never be answered to satisfy everyone: what is the meaning of life, and why does it always rain on Bank Holidays? Who was the best James Bond in film is one of those questions.

Many online polls and film fan surveys will plump for Sean Connery. He was the original, a bit tough looking and never cared that every character he plays has a Scottish accent, even if they're supposed to be Egyptian or Irish.

As well, Scottish people are famously stingy with money. I'll let you pause for a moment and come up with all the good jokes for yourself.

Any way. Then came George Lazenby who gave Bond an aggressive edge but quit after one shot as he didn't like money and fame (probably).

After Connery had another crack at the job, Roger Moore came along, making Bond a bit more flamboyant and suave, his safari suits proving he was man enough to look ridiculous.

Thespian Timothy Dalton gave the role 2 attempts, gritty affairs which killed the series for 6 years before Pierce Brosnan smoothed his way into Bond's tuxedo. Brosnan was a good Bond. He combined a lot of the qualities Connery and Moore gave the role but without a hairpiece or khaki jacket in sight. But the films he appeared in were not the best 007 vehicles and he eventually gave way for Daniel Craig.

Craig was impressive in his debut in Casino Royale. He looked bullish but wasn't bulletproof, he made mistakes and judgements of error, he was flawed. Although Quantum of Solace was messy, Craig has the best chance to remove Sean Connery as the best screen Bond ever.

Unless you count non-EON Productions of James Bond in which case Bob "can I have a P please?" Holness is clearly the best with his radio version of 007 in 1956.

Which is the best James Bond film?

The best James Bond film by popular and critical opinion is Dr No.

It is the quintessential Bond film, starring the man many believe to be the best Bond. It was the first Bond film to be made and featured classic moments such as Ursula Andress somehow scraping by through life as a seashell seller (she does sell seashells on the seashore) and Connery introducing himself as "Bond, James Bond".

Snapping at the heels of Dr No is the 2006 version of Casino Royale, exploding onto the screen with a vigor and hint of darkness which appealed to modern audiences.

The decidedly worst Bond film is A View to a Kill, as Moore was getting a tad crusty for chasing after villains by then (he was 57). And yes, we know the worst performing Bond film (after adjusting for inflation) was License to Kill. This was possibly due to Bond having his license to kill revoked, which just made the film about some serial womanizer with a drinking and gambling problem.