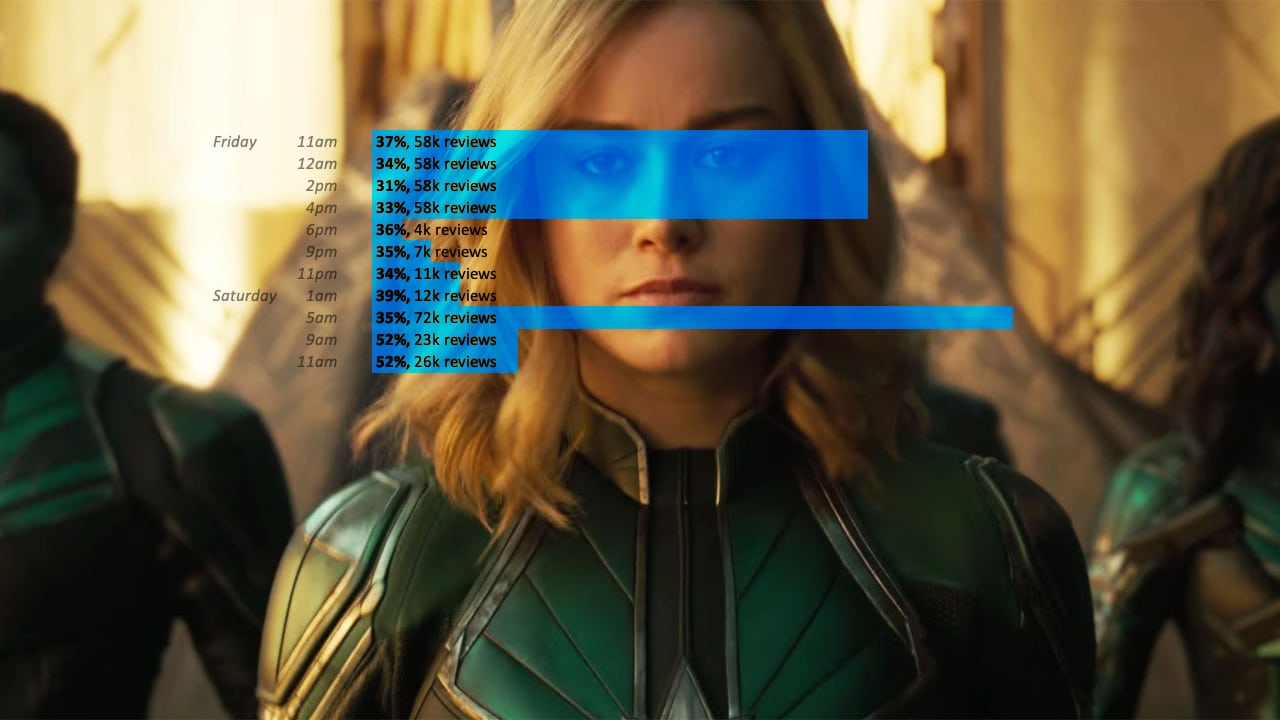 The world’s biggest movie score aggregator, Rotten Tomatoes, has removed over 50,000 user reviews of Captain Marvel in response to a “review bombing” campaign of the controversy-ridden movie on the day of its premiere.

The film featured over 58,000 reviews -- arguably an absurd number of reviews ahead of its actual release. Throughout the day, users who kept a keen eye on the page noted how thousands of reviews were being removed in real time, eventually dropping the number of total reviews to 7,000.

Twitter was ablaze with conspiracy theories about the deletions, which would seem to suggest that the company was trying to run defense for Captain Marvel, which has been promoted as an intersectional feminist film.

In response, Rotten Tomatoes stated to The Hollywood Reporter that a glitch allowed for the film to be reviewed even before release.

“We launched some changes to the movie pre-release functionality last week, which included not allowing users to leave a comment or review prior to a movie’s release in theatres. However, we still invite users to vote if they ‘want to see’ a movie prior to its release, and that vote total is displayed on the site. We have identified a bug in the post-release functionality for the movies that have released into theaters since our product update last week. The quantity of user ratings (which is displayed directly below the audience score and is intended to only include the quantity of users who have left a rating or written review after a movie’s release) had included both pre-release and post-release fan voting.”

The website added that these changes were made to prevent any future trolling.

“We are disabling the comment function prior to a movie’s release date. Unfortunately, we have seen an uptick in non-constructive input, sometimes bordering on trolling, which we believe is a disservice to our general readership. We have decided that turning off this feature, for now, is the best course of action. Don’t worry though, fans will still get to have their say: Once a movie is released, audiences can leave a user rating and comments as they always have.”

People on YouTube and Twitter are now calling out what looks like positive review bombing, where the movie's user rating is being spammed with identical positive reviews.

Captain Marvel actress Brie Larson, who plays the lead role of Carol Danvers, has been the subject of criticism following comments about white males and her intersectional feminist activism.