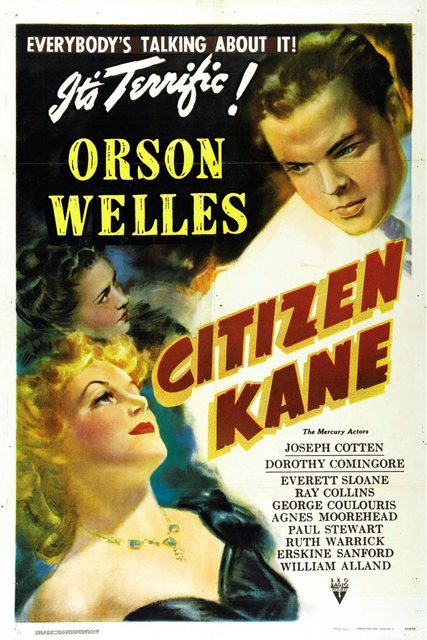 So I just finished watching this and wow, I did not know what I was getting into.

The black and white film begins with a night shot of a "No Trespassing" sign on a chainlink fence, then climbs up and over, blatantly disregarding the order of the master of the property, to outside a gate with a giant K atop it and a massive castle in the background. Not to be deterred on its quest, the camera continues on to another entrance, crossing a river, going over a drawbridge, and walking up the path to the front steps. Here, the camera pans up to the singularly lit room in the entire fortress seen throughout the venture. The light goes out and the camera switches perspective. We are in the room and see the sun beginning its own climb, an allusion perhaps to the opening we just witnessed. Then suddenly snow, cold dark snow that is falling on a cabin with a playful snowman next to it. What's this? The camera zooms out to reveal a hand holding onto a snow globe. "Rosebud", the mustachioed man's mouth utters. The snow globe slips from his grip, rolls off of the bed onto the floor below and shatters. A woman nurse comes into the room, reflected off the shattered remains of the snow globe's glass, crosses the man arms in front of his chest, and covers him completely with his bedsheet.

That man, as you learn through the course of the movie, was Charles Foster Kane, played magnificently by Orson Welles, on his deathbed. His story, his life's works, and the ups and downs of his journey is biographically dictated by those who knew and were closest to him in life via Jerry Thompson, played by William Alland, a reporter tasked with finding out the meaning of the mysterious final phrase Kane spoke.