This will probably be a hint at my age, but I rarely steal cultural content from the internet. I pay for my music and apps and the movies and television I watch online, through iTunes and Netflix and amazon.com, largely because I feel bad stealing, but also because I can afford to pay, and it strikes me as just that I should subsidize musicians and artists and actors now that I am in a position to do so.

I make an exception, though, for content that I have no option to purchase. I hereby confess that I have not paid a dime to the BBC for the very great pleasure of watching Downton Abbey, because the BBC is retarded if they think I'm going to give them money to be a full season behind!

Torrent it is! And apparently, I am not alone. Viewers all across the English speaking world have taken to Downton Abbey in droves, and in reading some of the explanatory commentary on the web, I have come to understand that Downton Abbey appeals to me for some very different reasons than cultural pundits might guess.

The story revolves around the Crawley family, landed aristocrats heir to the titles Lord and Lady Grantham and to the seat of Downton Abbey. Maggie Smith is hilariously magnificent as the Dowager Countess and she takes upper class snobbery to the level of art. 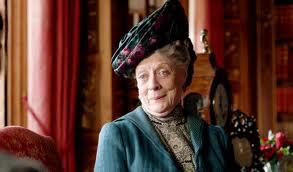 It's kind of interesting to watch the shenanigans of the Crawley family and especially the relationships between the three girls, who are all so different, but ultimately, I don't give a shit what happens to them. Live, die, cry, triumph – blah blah blah who gives a fuck?

I'm far more interested in the staff. When I watch Downton Abbey, I don't imagine myself to be part of the aristocracy. I engage no fantasy of unparalleled wealth and privilege and social acknowledgement. I watch Downton Abbey, taking for granted that were I suddenly transported across time and space, I would NOT be Lady Mary. I would be Anna, the maid.

Other viewers might swoon over Matthew Crawley, heir to Downton, but me?

Obviously, Downton Abbey is portraying an extremely romanticized notion of what the serving class actually DID, and the extent to which they were valued, but it's a STORY, not a documentary, so who cares? What comes across very powerfully to me is how the work is recognized and acknowledged. The idea that the work it takes to run a home isn't work at all is utterly laughable when the home is Downton Abbey.

The idea of taking the head housekeeper, Mrs. Hughes, aside and asking her "what the hell do you DO all day" is inconceivable, and yet, I routinely get some variation of that question when asked about my own life. "I could never be a stay at home wife and mother. Gosh, I wouldn't know what to do with myself". How many times have I heard that kind of bullshit? More than I can count, and it never fails to make me want to slap the shit out the speaker. Every aspect of housekeeping is taken apart and lathered with prestige and expertise in Downton. Apprentice kitchen maids are in awe of the cook, footmen long to be valets and under-butlers hope to one day take over from the man himself, Mr. Carson, Head Butler.

The work the servants do is valued and despite the fact that there is such a HUGE class difference at play, their social positions are respected and admired by the Crawley family.

That's another thing I really love about Downton – it's a complete fabrication, of course, but the sentiment is just and right. Lord Grantham really cares about the people who rely on Downton for their income and livelihoods. Rather than snark over the unearned wealth of the Crawley family, the show focuses on the responsibilities and obligations that come with wealth. Lord Grantham lives in a web that includes everyone, even the lowliest kitchen maid. He must act with their welfare in mind, and not just his own.

My guess is that Downton appeals to American audiences in particular because of that idea of a social contract. There is no shame in wealth, but there is great shame in not understanding that it comes with responsibility. Australians have a great saying: "a fair go". It means that we don't all start out equal, and that's fine, but the job of society is to make sure that everyone has a fair go at success. No one HAS to take advantage of the opportunity in front of them, but everyone should HAVE opportunity.

Carson: "We may have to have a maid in the dining room."

The Earl of Grantham: "Cheer up, Carson. There are worse things happening in the world."

Carson: "Not worse than a maid serving a duke."