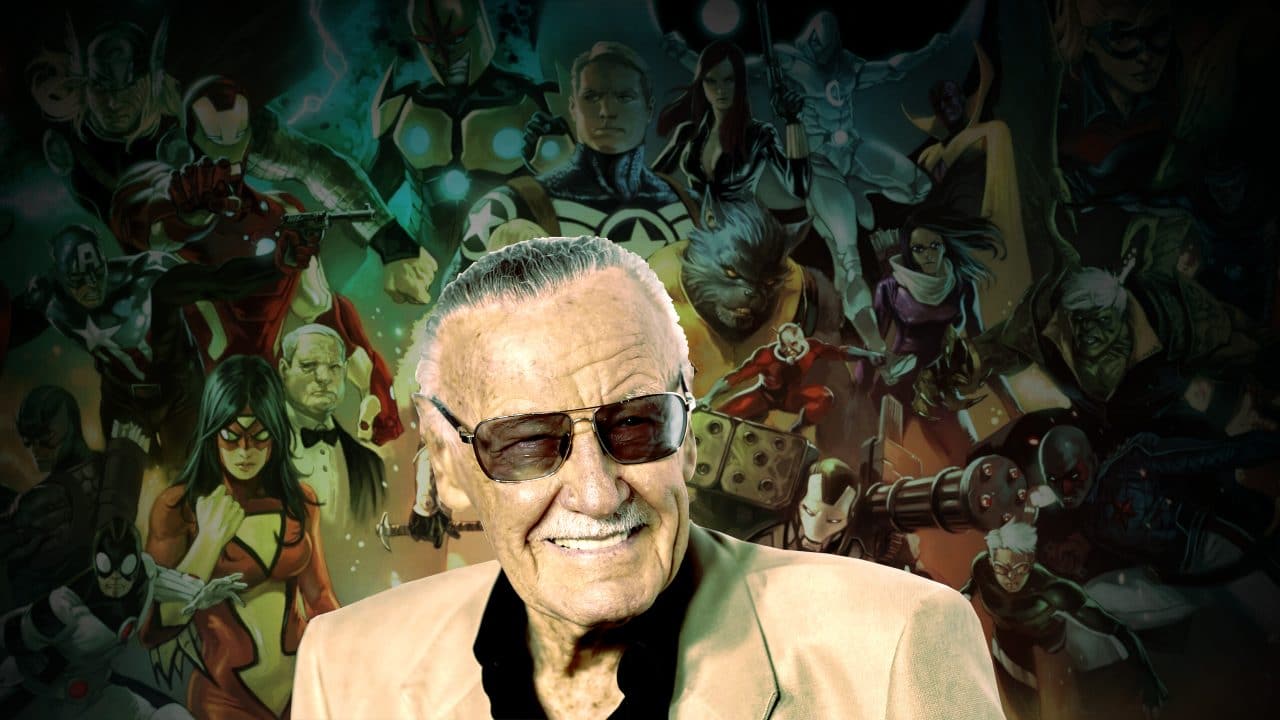 The woke brigade on Twitter consists, by far, of some of the most transparent clout chasers you’ll ever find in today’s social landscape. Today, the great, legendary Stan Lee left this hellish realm for the great beyond, and the immediate response from woke Twitter was to celebrate his death -- with claims that he was a homophobe, a sexist, a racist, and every other problematic -ist you can think of.

Their remarks are vile, to say the least.

Here we can see Thanos snapped his fingers and half of the women in the world got hashtag #metoo’d. Behold the power of Stan Lee. 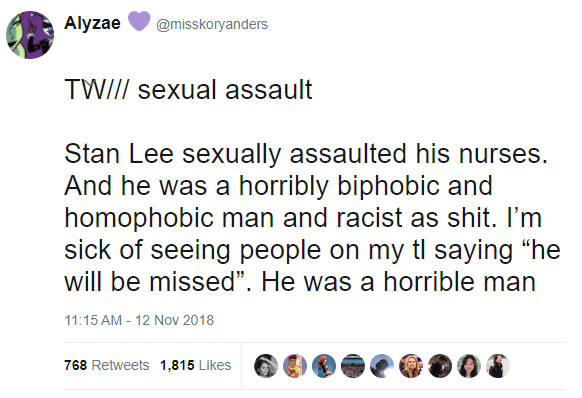 No, Stan Lee did not sexually assault his nurses. These claims are based on a lie perpetuated by the nursing organization that attempted to fleece Stan Lee for his wealth. The Hollywood Reporter investigated the claims and found that Lee, who was 95 at the time, was the victim of elder abuse.

This person is clearly clout chasing. Prior to this deranged bile he posted numerous tweets voicing condolences over Stan Lee’s death -- none of which received any traction, prompting him to update his software from the Blue Checkmark repository. 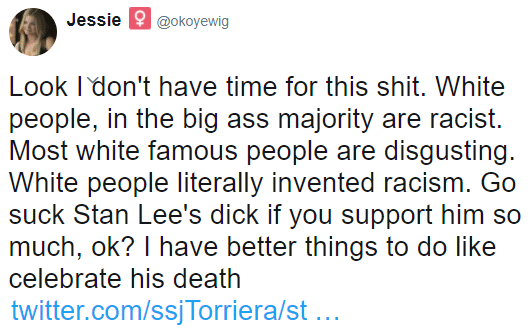 And it just goes on and on and on. 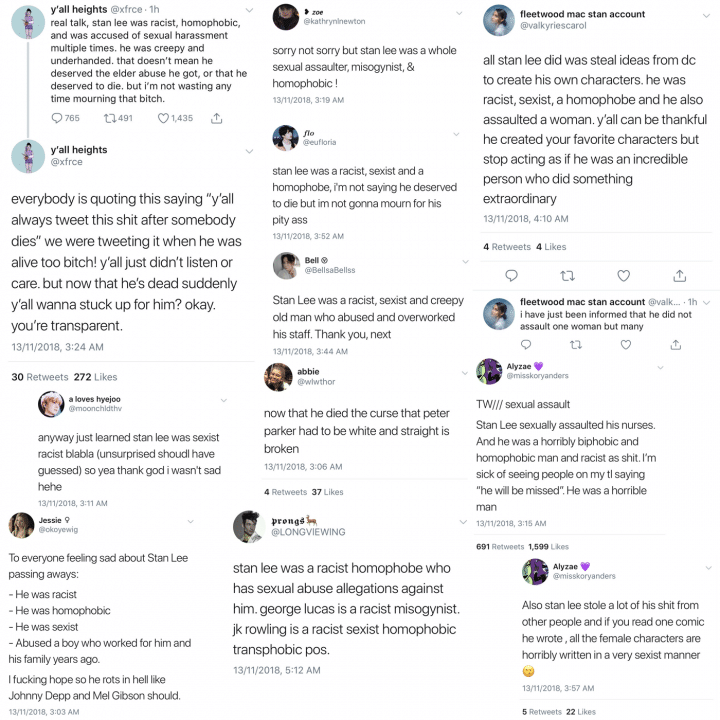 It's amazing how these supposedly virtuous individuals have no problem demonstrating their monstrousness and lack of humanity in their woke crusade for social justice.

Throughout his life, Stan Lee promoted not only views that would have been considered progressive in his heyday, but the human spirit and its values, which he managed to perfectly capture in his creation of Peter Parker and every other superhero he designed.

Stan Lee gave many of us heroes we could look up to and aspire to be when there might have been no one else in our lives. Endowing them with superpowers and abilities, these heroes were nonetheless human, with all the failings and challenges that anyone could relate to. He believed in the strength of the human spirit and the ability to overcome bigotry, and he actively challenged the status quo.

Penning a piece in 1968, during the height of the civil rights movement, Stan Lee wrote on his Marvel column, Stan’s Soapbox:

“Let’s lay it right on the line. Bigotry and racism are among the deadliest social ills plaguing the world today. But, unlike a team of costumed supervillains, they can’t be halted with a punch in the snoot, or a zap from a ray gun. The only way to destroy them is to expose them – to reveal them for the insidious evils they really are. The bigot is an unreasoning hater – one who hates blindly, fanatically, indiscriminately. If his hang up is black men, he hates ALL black men. If a redhead once offended him, he hates ALL redheads. If some foreigner beat him to a job, he’s down on ALL foreigners. He hates people he’s never seen—people he’s never known—with equal intensity—with equal venom.

Now, we’re not trying to say it’s unreasonable for one human being to bug another. But, although anyone has the right to dislike another individual, it’s totally irrational, patently insane to condemn an entire race – to despise an entire nation – to vilify an entire religion. Sooner or later, we must learn to judge each other on our own merits. Sooner or later, if man is ever to be worthy of his destiny, we must fill our hearts with tolerance. For then, and only then, will we be truly worthy of the concept that man was created in the image of God—a God who calls us ALL—His children.”

Stan Lee was more progressively minded and tolerant than almost anyone else in his era. His comics helped to end racism and bigotry. They had that much of an impact. The kind of racism you see today, which still exists, is mild by comparison to the period he lived in.

To be certain, you can joke about Stan Lee’s death. Just look at comedian Anthony Jeselnik’s tweet.

Even if you don’t appreciate morbid sense of humor, you have to admit he was creative — and in no way did he condemn Stan Lee with disgusting smears.

As for Stan Lee’s haters, judging by what we're now reading on Twitter, will anyone mourn such people?